In this post, we will investigate and showcase a machine learning selection framework that will aid traders in finding mean-reverting opportunities. This framework is based on the book: “A Machine Learning based Pairs Trading Investment Strategy” by Sarmento and Horta.

A time series is known to exhibit mean reversion when, over a certain period, it reverts to a constant mean. A topic of increasing interest involves the investigation of long-run properties of stock prices, with particular attention being paid to investigate whether stock prices can be characterized as random walks or mean-reverting processes.

If a price time series is a random walk, then any shock is permanent and in the long run, the volatility of the process will continue to grow without bound. On the other hand, if a time series of stock prices follow a mean-reverting process, there is a tendency for the price level to return to a constant mean over time. Thus it is seen as a very attractive opportunity for investors because of its more reliably forecastable future returns.

Pairs trading methods differ in how they form pairs, the trading rules used, or both. The dominating non-parametric method was published in the landmark paper of Gatev et al: “Pairs trading: Performance of a relative-value arbitrage rule”, where they propose using a distance-based approach to select the securities for constructing the pairs. The criterion used was choosing pairs that minimized the sum of squared deviations between the two normalized prices. They argue that this approach “best approximates the description of how traders themselves choose pairs”.

Overall, the nonparametric distance-based approach provides a simple and general method of selecting “good” pairs, however, this selection metric is prone to pick up pairs with a small amount of variance of the spread and therefore limits overall profitability.

Another two popular approaches are the cointegration and correlation methods. Basically, correlation reflects short-term linear dependence in returns while on the other hand cointegration models long-term dependencies in prices (Alexander 2001).

A significant issue with the correlation approach is that two securities correlated on a returns level do not necessarily share an equilibrium relationship, and there is no theoretical foundation that divergences are reversed. This potential lack of an equilibrium relationship leads to higher divergence risks and thus to significant potential losses.

The Problem of Multiple Hypothesis Testing

As the popularity of Pairs Trading grows, it is increasingly harder to find rewarding pairs. The simplest procedure commonly applied is to generate all possible candidate pairs by considering the combination from every security to every other security in the dataset.

First, the computational cost of testing mean-reversion for all the possible combinations increases drastically as more securities are considered.

The second emerging problem is frequent when performing multiple hypothesis tests at once and is referred to as the multiple comparisons problem. By definition, if 100 hypothesis tests are performed (with a confidence level of 5%) the results should contain a false positive rate of 5%.

This problem was tackled by (Harlacher 2016), who found that Bonferroni correction leads to a very conservative selection of pairs and impedes the discovery of even truly cointegrated combinations. The paper recommends the effective pre-partitioning of the considered asset universe to reduce the number of feasible combinations and, therefore, the number of statistical tests. This aspect might lead the investor to pursue the usual, more restrictive approach of comparing securities only within the same sector.

This dramatically reduces the number of necessary statistical tests, consequently decreasing the likelihood of finding spurious relations. However, the simplicity of this process might also turn out to be a disadvantage. The more traders are aware of the pairs, the harder it is to find pairs not yet being traded in large volumes, leaving a smaller margin for profit.

This dilemma motivated the work of (Sarmento and Horta 2020) in the search for a methodology that lies in between these two scenes: an effective pre-partitioning of the universe of assets that does not limit the combination of pairs to relatively obvious solutions, while not enforcing excessive search combinations.

How can Machine Learning solve this?

In this work (Sarmento and Horta 2020), propose a three-pronged process, built using unsupervised learning algorithms, on the expectation that it infers meaningful clusters of assets from which to select the pairs. 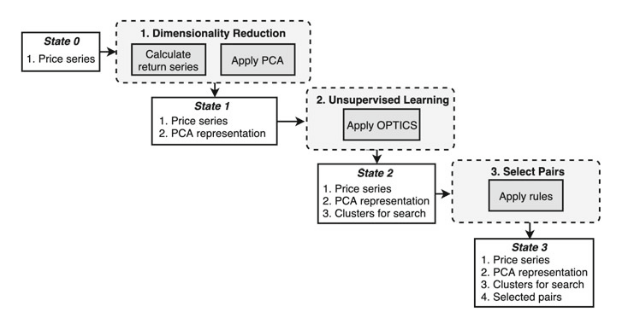 The premise is to extract empirical structure that the data is manifesting, rather than imposing fundamental groups each security should belong to. The proposed methodology encompasses the following steps:

In the quest for profitable pairs, we wish to find securities with the same systematic risk-exposure. Any deviations from the theoretical expected return can thus be seen as mispricing and serve as a guideline to place trades. The application of PCA on the return series is proposed to extract the common underlying risk factors for each security, as described in (Avellaneda and Lee 2010).

PCA is a statistical procedure that uses an orthogonal transformation to convert a set of observations of possibly correlated variables into a set of linearly uncorrelated variables, the principal components. The transformation is defined such that the first principal component accounts for as much of the variability in the data as possible. Each succeeding component, in turn, has the highest variance possible under the constraint that it must be orthogonal to the preceding components.

DBSCAN, as the name implies, is a density-based clustering algorithm, which given a set of points in some space, it groups together points that are closely packed together.

OPTICS is an extension built upon the idea of DBSCAN, but improves on its major weakness: the problem of detecting meaningful clusters in data of varying density. To do so, the points of the database are ordered such that spatially closest points become neighbors in the ordering. Additionally, a special distance is stored for each point that represents the density that must be accepted for a cluster so that both points belong to the same cluster.

In summary, there are a few differences:

The framework described till now has been implemented as a part of the ArbitrageLab library that has been in development for the last few months. The steps above have been condensed down into a simple manner as follows;

The selection process starts with the testing of pairs, generated from the clustering step, for cointegration using the Engle-Granger test. This cointegration testing method was chosen based on its simplicity. If you want to learn more about cointegration methods I recommend reading our article: An Introduction to Cointegration for Pairs Trading.

Secondly, a validation step is implemented to provide more confidence in the mean-reversion character of the pairs’ spread. The condition imposed is that the Hurst exponent associated with the spread of a given pair is enforced to be smaller than 0.5, assuring the process leans towards mean-reversion. The Hurst exponent is a measure that quantifies the amount of memory in a specific time series, which in this case means, how mean-reverting is the process under analysis?

In third place, the pair’s spread movement is constrained using the half-life of the mean-reverting process. The half-life is the time that the spread will take to mean-revert half of its distance after having diverged from the mean of the spread, given a historical window of data. In the framework paper, the strategy built on top of the selection framework is based on the medium-term price movements, so for this reason the spreads that either have very short (< 1 day) or very long mean-reversion (> 365 days) periods are not suitable.

Lastly, every spread is checked to make sure it crosses its mean at least twelve times a year, to provide enough liquidity and thus providing enough opportunities to exit a position.

This step can be easily done writing the following lines of code; 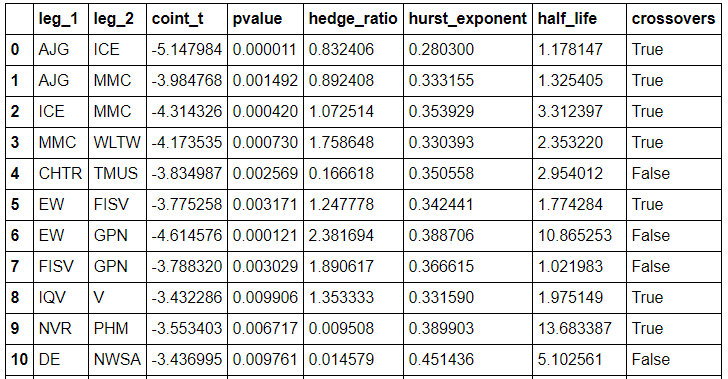 The success of a Pairs Trading strategy highly depends on finding the right pairs. The classical approaches to find tradable opportunities used by investors are either too restrictive, like restricting the search to inter-sector relationships, or too open, like removing any limit on the search space.

In this post, a Machine Learning based framework is applied to provide a balanced solution to this problem. Firstly with the application of unsupervised learning to define the search space. Secondly, in the grouping of relevant securities (not necessarily from the same sector) in clusters, and finally in the detection of rewarding pairs within them, that would otherwise be hard to identify, even for the experienced investor. 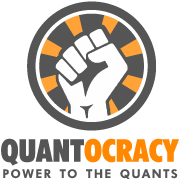